From Thinking Man to Plato
In December 1999 The Teaching Awards Trust invited a number of the UK’s most accomplished sculptors to create a piece of history. Their challenge was to produce a prestigious Award which would become the symbol of the recently established Teaching Awards Trust, who celebrate and reward excellence in the teaching profession through an annual Awards scheme. The work would be historically significant, as it would become an enduring symbol of excellence for the teaching profession in the way that the OSCAR has stood for all that is outstanding in the film industry.

Out of that competition Glynis Owen was chosen to design the Award. The Trust greatly admired her sculptures, and in particular, a work titled ‘The Thinking Man’ which they felt would represent the teaching profession with dignity. The task was then set to adapt this piece of art into the symbol of excellence that it is today. Teaching Awards Trust

Commissioned by The Teaching Awards Trust

John Downton Award for Young Artists, Schools Trophy
This prestigious polished bronze trophy is awarded to a young artist selected from 25 participating schools. The trophy design, in polished bronze is based on the eye.
The circle of space in the centre of the eye, frames the view beyond, representing the artist’s selective vision. 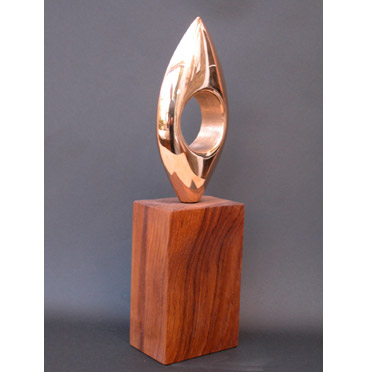